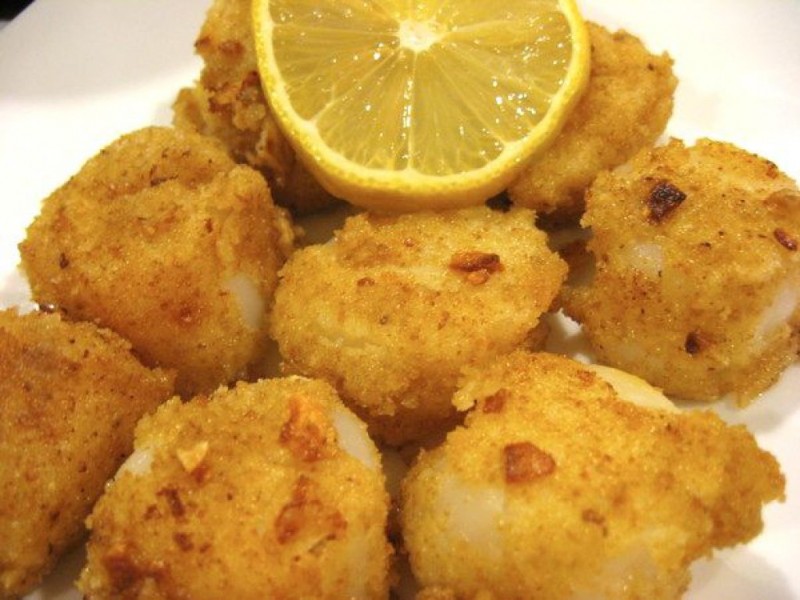 300 grams of raw tuna - let it the freeze for about 10 minutes to then slice it thin - laid it on scissor cut squares of nori seaweed, mixed up the wasabi and dipped it into a small bowl of soy sauce.
Opened and cleaned 8 fresh scallops, made a lite breading - crushed matzoth cracker, olive oil, parsley, grated Romano cheese, black pepper - to cover the scallop in the deep side of its shell and baked. Popped it into the oven and sautéed my fresh artichoke hearts - olive oil, thinly sliced shallots, garlic, and 1 little SOB of a pepperoncino. My green grocer had already prepped the chokes for me (12 chokes for 4 Euro) - all I had to do was trim them a little bit more and invite them into my pan. In the mean time we ate the tuna.
I had already prepped about 3 dozen “mazzanciolle”  shrimp (Google “mazzancolle” for more information)  - de-veined cut each one into 3 pieces and put all into a mixture of two juiced lemons, a tablespoon of grated fresh ginger, lots of chopped fresh pungent garden grown rocket and some salt… this was in the fridge for about an hour.
By the time we finished the tuna the scallops where ready - the gratin was picture perfect ---- I actually put two scallops into one shell so therefore we had 4 scallop shells - I placed one shell in each plate and along side it placed 4 artichokes. Grand combination indeed. I also make an octopus salad with artichoke hearts. I was surprised to learn that artichokes go well with seafood. The darndest thing about chokes is that there is no kind of wine to compliment them - So, if you do them with seafood you can’t go wrong with whatever wine you choose to serve.
As I pulled out the scallops I put the Monk Fish in to grill - I cleaned the tails and brushed them with olive oil and sprinkled them with some “Sason” fish seasoning (hey, a little monosodiumglutimate isn’t going to kill you immediately. right?) (then I still like the song, “Mas sabor en la comida con Sason en la comida…. con Sason”).
The scallops - my wife says that they were excellent… and I know why - this time I didn’t stuff them to suffocate the dollop of meat. The “stuffing” mixture was lite enough for the taste of the meat to shine through but tasty enough to highlight the scallop. Shrimp ceviche - what can I say? Was it the R de Ruinart Champaign? Could have very well been... but the shrimp concoction was superb!  (HYPERLINK "http://www.ruinart.com/)"http://www.ruinart.com/). OK - I didn’t tell you that I had already prepared the finger nailed sized strawberries (“fragole di bosco”) & raspberries with the juice of one blood orange, a table spoon of lemon, some grated ginger and half cup of Champaign.... It was the desert that got me the major points..,. which I have without much difficulty already (after only 2 days) lost. Bene - I am open for detailed questions regarding buying & the preparation of this whole Saint Valentine’s mess. Let me know.....  OH - cost? the champaign was on the house. All the rest costs about 45 to 50 euro.....